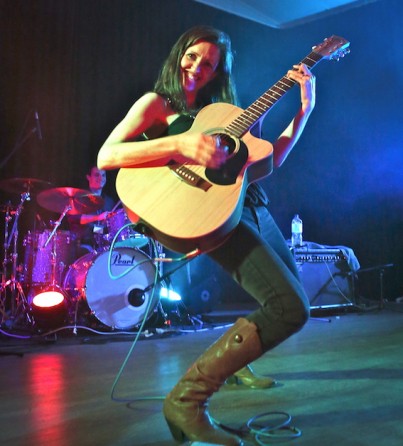 Rockhampton is at a cultural crossroads. And that’s no bull. The large Central Queensland town that has been best known as the beef capital of Australia is in its final six months of a three-year pilot program, Creative Capricorn.

Funded by Federal, State and Local government, Creative Capricorn is designed to use arts and culture to bring long-term benefits to the local economy and the community.

More than 300 local and regional artists and arts workers have worked for a professional fee;

6632 people from Rockhampton and the greater region have engaged with the program by either attending or participating in events and activities;

More than 260 artists have developed their professional skills through the program;

Local musician and program participant, Kate Leahy (pictured), became the new voice and face of the ‘Summer of Capricorn’ tourism campaign, following her exposure through the program. See Kate in the campaign here.

Strengths of the program

One of the key drivers of success has been the program model, which has encouraged community participation and engagement across the wide community, including amongst under-represented groups such as young audiences and Indigenous communities. The model has also been consistently strong in encouraging artists to use their skills and creativity to tell local stories.

Creative Capricorn has nurtured artistic excellence; the Creative Producer has identified and untapped artists who are ready to work at a higher professional level. Successful strategic partnerships have been formed with organisations and individuals across the arts and tourism sectors. The skills and dedication of the Creative Producer combined with the commitment of the operational staff at Rockhampton Regional Council have resulted in tangible outcomes for the project.

There was initial resistance form the Rockhampton arts community to an external group arriving to roll out the program. As a result, it took considerably longer than anticipated for the Creative Producer to achieve tangible outcomes.

Some issues have arisen relating to the way the program has been governed and administered, creating delays and changes in time frames. One of the key challenges has been lack of support for the program by Rockhampton Regional Council’s elected representatives, partly because the model was developed under previous Council leadership. Other political and external challenges have also arisen which have hindered the potential of the program. The way in which Rockhampton was nominated to receive the program has also impacted on the delivery of the initiative.

The fork in the road

A final Evaluation Report will be prepared in October 2015 to assess the extent of the short-term legacy of Creative Capricorn in Rockhampton.