The power of the pre-test / post-test 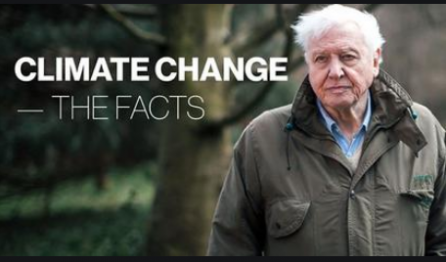 This week I visited my old school, Fort Street High in Petersham, Sydney. I wasn’t there for nostalgic reasons. Rather, I had the good fortune of sitting in on a documentary screening for Years 9 and 10 science students. Three hundred or so students filed into the hall to be shown the recently-released BBC documentary, Climate Change- The Facts, presented by Sir David Attenborough. This was an initiative of Fort Street High Science teachers, who considered it essential viewing for their students.

You may have seen this documentary. Released in April this year, it is an eye-opening, graphic, harrowing account of the climate change emergency we find ourselves in. It includes devastating footage of recent climactic upheavals which, at times, makes surreal viewing. It was described by the BBC as a ‘call to arms’.

But despite the subject matter, the afternoon at Fort Street wasn’t all gloom and doom. The school had invited ABC Radio National’s Science Show Producer, David Fisher*  to host a Q&A session following the screening. Students were given the opportunity to ask or clarify anything from the documentary. Their questions were well-considered, and included:

As a social researcher, I was interested in measuring the impact of the documentary. Because we had limited time, I needed to consider just one variable of interest, that is, one thing to measure. I felt that this should be knowledge. How much did they learn from the documentary and did this relate to how much they already knew?

With the technical assistance of the Deputy Principal, I designed this three-question survey that students received on their phones:

Question 1. Before seeing the documentary, how familiar were you with the material presented? (not at all /a little / a lot);

Question 2. How much did you learn from the documentary? (nothing / a little / a lot); and

Question 3. What one piece of information will you remember from the documentary?

This is a type of pre-test/post-test. The purpose of conducting a pre-test is to establish baseline data before being exposed to something. In this case, they saw the documentary before the question was asked, so it was a kind of ‘retrospective’ pre-test. A post-test measures the extent to which the students have changed in some way (or not) according to the variable(s) of interest. 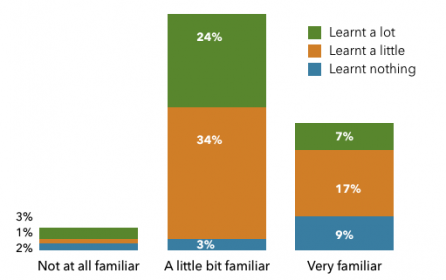 Prior to seeing the documentary, close to two thirds (63 per cent) of students said they knew a little, just under one third (32 per cent) knew a lot, and six per cent claimed to know nothing.

Conducting a quick pre-test/ post-test survey can be an effective way to obtain a quick reading of the effectiveness of something. Even limiting a survey to just one or two key variables can provide you with a snapshot that will enable you to make important strategic decisions around a program, service or activity.

A hard-hitting documentary of this nature is best received by students who already have a basic grasp of the concepts. If these findings are representative of the broader Year 9/10 cohort, it will be important for it to be screened more widely in other schools among students who we can assume also already understand the basics of climate change. When it comes to our climate change emergency, this may be crucial if we are to tap into the hearts and minds of the next generation to enable immediate positive change.

* David Fisher also attended this school and is my brother
**Sample size: n=110