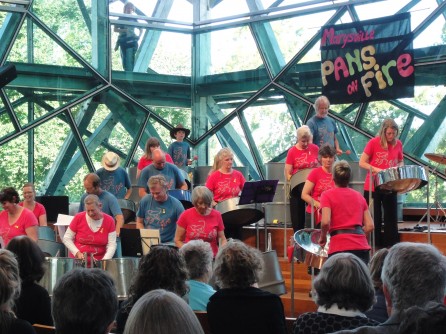 Following the Black Saturday bushfires in Victoria in 2009, Arts Victoria––through Regional Arts Victoria––offered a series of quick response grants of up to $2,500 during the early recovery phase for artists to work in their communities on projects that contributed to the recovery effort. As the evaluator of this initiative, I met a number of grant recipients, including Marysville resident, Rita Seethaler. I caught up with her last week to see where she is at with her project, five years on.

How the project came about

In the winter of 2009 Rita Seethaler (left) went to Switzerland to visit her sick mother. While she was there, she talked with friends with whom she had played steel pans for many years before coming to Australia. She told them about the fires and the social upheaval they had caused. At the same time, Regional Arts Victoria had just offered quick response grants to encourage artists to work on arts recovery programs in their communities. This seeded the idea for Rita to apply for a grant to start a steel band in Marysville and the Triangle District (the other local towns of Narbethong, Buxton and Taggerty) as a way of helping with the recovery process. Some of her Swiss friends immediately offered donations of steel pans they were no longer using. So, Rita returned to Australia with a germ of an idea and was successful in securing the modest grant from Regional Arts Victoria.

Early days of the project

With a $2,500 grant and a great deal of commitment and good will, Rita formed the Steel Pan Band in Marysville; designed to attract participants of all levels of musical literacy, including those who had never learned music. After some months, the band had about 22 members who met weekly to rehearse and play. Their rehearsal space acted as a neutral place where people could socialise and share stories about their experience in the fires. Over time, they started talking about more uplifting things and focusing on a positive future. The band has contributed to the rebuilding of the social capital of Marysville and the broader region by creating new social networks and giving participants new skills and confidence.

In 2011 the group performed in a high profile event at Federation Square, Melbourne, to commemorate the second anniversary of Black Saturday. By then they had adopted a new name; Pans on Fire. Over these years the group were hired for gigs all around Victoria. In April 2013 Rita instigated the staging of the inaugural Australian Steelband Festival in Marysville, made possible from corporate funding she attracted. Steel bands participated from interstate, New Zealand, Oman and Trinadad. The growth of the project continued as funding and support came from a number of sources in response to the tireless effort Rita put into writing grant applications, including for Regional Arts Victoria (RAV), Foundation for Rural and Regional Renewal (FRRR), Tourism Victoria, Australia Council for the Arts, Murrindindi Shire Council, and Multicultural Arts Victoria.

It has been five years since the Black Saturday bushfires in Victoria. There are currently about 70 members and three steelbands have been established: Pans on Fire, Hot Pans and Jammin’ (a mums and kids band).  They have performed over 90 gigs around Victoria and there are 20 participating children. Rita has trained other community members to take rehearsals, including parents of participating children and trained musicians. Each band started from scratch and most participants had never seen a steel pan or had formal musical training. The groups are self-funded via membership contributions, the sale of their first CD recorded in 2011 and concert ticket sales.

The group recently played in front of its largest audience of an estimated 50,000, plus half a million on live TV, in Melbourne’s 60th annual Moomba Parade, along with the CaribVic dancers, on 10 March 2014.

Hot Pans (and Pans on Fire) will next be playing at the Alexandra Picnic Races in Alexandra on Saturday 22 March, 2014.

This project illustrates that small seed funding can be the catalyst for long term project growth and sustainability.  The quick response grant gave Rita the financial start she needed and the confidence that her idea was feasible. But the ongoing success of the project has come about from her business acumen, talent, drive, compassion and commitment, along with her ability to engage with the community. I can’t wait to see what is in store for this group in the years to come.