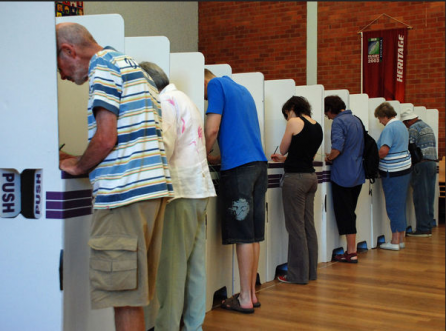 The recent Australian federal election was not a referendum on the carbon tax.  It was not a referendum on anything. The reason is simple. A referendum is a vote of the people on one measure in response to one very specific question about the Australian Constitution. The question is posed as a statement that requires a yes/no response.  Unless a particular question were asked of the electorate about whether Australia should repeal the carbon tax it is impossible to know whether this issue influenced the election result in any way and to what extent.  Besides, there is nothing in the Australian Constitution to bind the Parliament – current or future – to act on the outcome of such a question, it not being a constitutional question.  So if the issue of the carbon tax or carbon pricing were to be put to the electorate, it wouldn’t be a referendum per se, it would be a plebiscite.  A plebiscite is a vote by citizens on a matter of national significance, but one which does not affect the Constitution.

As a market research consultant I have a keen interest in process, facts and evidence.  I design surveys and interpret research findings as accurately as possible.  To talk about the election being a referendum is the equivalent of me reporting survey findings to a client with no supportive evidence. If you work with consultants who design surveys it is important for you to be aware that they have a responsibility to understand the limitations of various question types.

If the recent election really were a referendum on the carbon tax, here is what we would have been required to fill in at the ballot box: 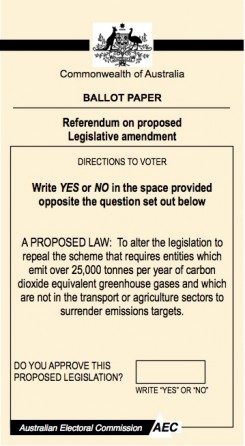 While we’re thinking about ways to explore people’s views on the carbon tax, let’s consider a number of other question types that could be used in general population surveys.

An open-ended question about the carbon tax may read:

In the following space provided, please explain why you think the carbon tax should be retained or repealed.

Which of the following statements do you most agree with? Please select one response only.

This is one of the most commonly used question types.  On an interval scale, it is important that the spaces between each option are equal, whether it’s a number or a rating range.

Thinking about the issue of pricing carbon pollution, how likely is this issue to be in influencing your vote in a Federal election?

This question type asks respondents to rank a range of items or choose from an ordered set.

When considering the range of issues that are likely to influence your voting preference in a Federal election, please rank the following common issues in order of importance to you.  (Please fill in your rank order using numbers 1 through to 7 ,with 1 being the most important).

Australia’s Federal election on 7 September was not a referendum on the carbon tax. There was no clear evidence that the carbon tax was foremost in people’s minds as they cast their vote.  Sure, market research had been conducted prior to election day exploring people’s views on pricing carbon and the relative importance of this issue compared to others.  But what we had on 7 September was an election, not a referendum.