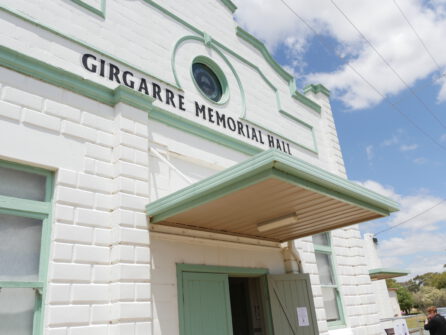 Girgarre is a dynamic small town situated in the Shire of Campaspe in northern regional Victoria. It was featured on the ABC’s Backroads program just this week as a town transformed by the power of music.

From 2016-2018, Girgarre was one of six small towns funded by the Victorian state government as part of the Small Town Transformations initiative, managed by Regional Arts Victoria. The initiative supported the delivery of six ambitious artistic projects across regional Victoria in town of less than 2000 people, over a two year period with the aim of transforming their towns and leaving a lasting legacy.

The Girgarre Revival project was a cultural response to the town’s declining industry, the drought, and dairy crisis and involved the building of an outdoor performance venue and stage to support large scale events and be a meeting point for the community, as well as a series of installations and participatory music events to encourage visitors into town.

NSF Consulting evaluated the Small Town Transformations initiative, following Girgarre’s progress over two and a half years. The evaluation was designed to explore what is was about the initiative that made it work, for whom and under what circumstances. I used a Multiple Case Study method to provide a systematic way of comparing and contrasting outcomes from the six participating towns, taking into account their contextual differences.

Girgarre established a successful partnership arrangement with the Shire of Campaspe.  Council was a major sponsor of their project and trusted the Girgarre project team to work autonomously to achieve their own stated aims and objectives. It was also clear to me that Council understood the evaluation process, providing valuable input into consultations, demonstrating commitment by showing up to community consultation events, and providing targeted and relevant follow up information.

The Girgarre Revival project team had the skills and expertise to successfully negotiate with local industry, which enabled the community to develop sustainable revenue streams and hope. They had the resources to develop visions that could be viable and not be solely reliant on the handouts and grants from government and other funding sources (although these were really important at the early stages of the project).

This community believed in the power of a combined effort. They established a clear set of rules for the ongoing cross support between groups, all their activity is focused on the collective. This was evident in activities such as the local market, whereby every community group was given the opportunity to generate their own income and activate their own core activity. Additionally, they attracted a wide range of groups to participate in their Community development committee, also testament to their success.

The legacy in Girgarre has been particularly strong, not least because the Girgarre Revival Project Manger had a long track record and solid reputation as being an enabler of positive inter-committee working relationships. They have real skill sets with this community and this has enabled them to grow and be the great community they are.

This evaluation involved preparing a program logic model, setting up criteria of merit and defining success.  If you work for local government and would like to brush on practical evaluation skills, enrol in NSF Consulting’s Practical Evaluation For Local Government course here.